The Philippine military undertook a resupply mission for its troops in the Second Thomas Shoal in the Kalayaan Island Group (KIG) on Tuesday November 23, exactly a week after the mission was aborted after two Chinese Coast Guard vessels attacked with water cannons the two civilian boats bringing the supplies to the soldiers.

The delivery of supplies for the small contingent of soldiers aboard the partly sunken BRP Sierra Madre, which is being used as an outpost by Filipino troops in watching the Second Thomas Shoal apparently went along with a scheduled rotation of watchers.

“The two civilian resupply boats manned by the Philippine Navy arrived at the Sierra Madre in the Ayungin shoal at 11 am today without any untoward incident,” Defense Secretary Delfin Lorenzana said hours after the two boats docked beside the Sierra Madre. “They are presently unloading personnel and cargo.”

“After a couple of days, they will return to Oyster Bay,” the defense chief added, referring to the Philippine Navy’s base in Palawan

The resupply mission was undertaken after Lorenzana told on Sunday that he had ordered the Armed Forces of the Philippines’ Western Command to carry out the aborted activity, wherein China’s ambassador in Manila has assured that Beijing will not interfere in the activity.

Still, China did not allow the delivery of supplies and personnel to go smoothly as a Chinese Coast Guard vessel was seen in the area, and it even sent a rubber boat that was manned by three men who drew close to the Sierra Madre.

“There was a Chinese coast guard ship in the vicinity which sent a rubber boat with three persons near the Sierra Madre while our boats were unloading and took photos and videos,” Lorenzana said.

“I have communicated to the Chinese ambassador that we consider these acts as a form of intimidation and harassment,” he added.

Relatedly, the Philippine Coast Guard (PCG) brought fishing gears and basic supplies to Pagasa Island in the KIG over the weekend in support of Filipino fishermen’s activity in the area.

PCG spokesman Commodore Armando Balilo said BRP Capones (MRRV-4404) of the PCG Task Force Pagsasanay (PCGTF-P) turned over the items to the municipality of Kalayaan Island Group (KIG) in support of the thrust of the Bureau of Fisheries and Aquatic Resources (BFAR) to support and encourage Filipino fishermen’s operations in remote maritime waters around the country.

It also ferried provisions for the PCG and Philippine National Police (PNP) stations in Pagasa.

“Relieving personnel were also transported to provide sufficient rest period to deployed law enforcement teams which is necessary in upholding public health and safety amid the COVID-19 pandemic,” Balilo added.

While underway to Pagasa Island from Puerto Princesa, Palawan, BRP Capones (MRRV-4404)’s commanding officer Captain Glen Daraug has monitored a China Coast Guard vessel approximately one to two nautical miles away from their vessel. No radio challenge was made by the Chinese ship while the Coast Guard ship continued its course towards its destination.

PCG Commandant Admiral Leopoldo Laroya said the routine mission of the PCGTF-P in the country’s maritime zones has manifested the PCG’s firm commitment to the government’s whole of nation approach on safeguarding national interests through rules-based and peaceful approach. 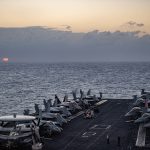 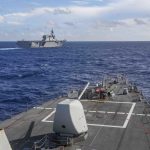 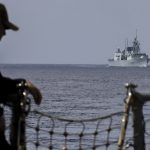