According to the latest BSI & TT Club Cargo Theft Report 2021, Brazil in 2020 was again the top-ranked country for cargo theft in South America, with the number of incidents occurring more frequently than any other country in the world.

A key driver of the high rates of cargo theft in Brazil is the presence of major illegal drug smuggling gangs that need to fund their trafficking efforts.

These gangs already exert control over swathes of territory in the country, are equipped with often heavy weaponry, and have extensive criminal networks, all of which lends itself to an environment prone to cargo theft.

This extreme rate of cargo theft, however, did drop for the first time in several years, as continued efforts by police and industry contributed to a slight decline in incidents in 2020.

Police increased patrols on major highways and also remained vigilant in the pursuit of cargo thieves that participated in major past incidents.

A continued process of identifying and arresting cargo theft gangs, particularly the sophisticated groups responsible for carrying out rapid assaults of high-value shipments in cargo trucks, facilities, and airports, also led to a drop in the number of incidents seen in hotspots like Rio de Janeiro and Sao Paulo.

Industries also stepped up and began implementing sophisticated countermeasures, such as vehicle killswitches, to assist in the prevention and ultimate drop in cargo theft in the country.

In Rio de Janeiro, officials saw a 34 percent decrease in cargo theft incidents, while their counterparts in Sao Paulo similarly saw a drop in incidents equating to about 20 percent.

While the decrease in these two areas is notable, it will take a continued commitment by both police and industry to lead to further long-lasting change in cargo theft rates.

Brazil is not the only country to experience issues with cargo theft in South America, with supply chains in Argentina, Chile, Peru, and, to a lesser extent, Colombia, all also facing risks of cargo truck hijackings.

This risk of hijacking is the dominant method of theft throughout the region, including in Brazil, with thieves also frequently employing the use of firearms to obtain driver compliance with the theft.

While the high cost of tobacco products traditionally drives this trend in cargo thefts in South America, the spread of COVID-19 and the subsequent lockdown measures imposed by country governments led to an increase in consumption of alcohol and tobacco, thereby creating an even higher black market-demand for the goods and increasing the appeal for theft.

Political instability, particularly over the past couple of years, often leads to protests that have the potential to become violent and impact cargo shipments unfortunate enough to be caught up in the unrest.

This is perhaps most prominent in Venezuela, where protesters would hijack and set cargo trucks on fire during riots.

However, given the unrest seen in countries throughout South America last year, including Peru and Chile, along with the fact that multiple countries will hold elections this year, it is likely to see further risk to cargo from political protests in the region.

A related issue that could threaten cargo security in the region is the residual economic impact of COVID-19, which has hit South American countries particularly hard and could end up forcing more to turn to crime to make a living.

Given the crimes of cargo theft and illegal drug smuggling in cargo are already established throughout the region, these risks could likely increase.

And lastly, although limited to primarily Colombia and Chile, the risk of terrorism too has the potential to impact cargo security and only underscores the need for comprehensive risk intelligence to be factored into cargo transportation plans to mitigate losses. 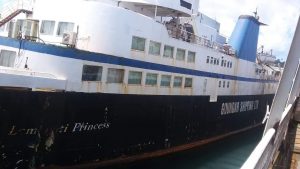