Crew safety a major cause of concern

The number of piracy incidents increased by 12% year-on-year to 201 in 2018, according to International Maritime Bureau statistics (including the boarding of 143 vessels; 34 attempted attacks; 18 vessels fired upon and six vessels hijacked).
Given 2017’s total of 180 incidents was the lowest total for 22 years, the 2018 piracy count still represents an 18% decrease in incidents from five years ago (2014 = 245).
However, the past year has seen a marked rise in attacks against ships and crews around West Africa.
Increased activity in the Gulf of Guinea (more than 70 incidents overall) is responsible for making Nigeria the top global hotspot for piracy, accounting for 48 incidents or almost one in four of all reported cases globally.
Many crews are kidnapped and taken into Nigeria where they are held for ransom, while Nigerian pirates have also demonstrated their capabilities further out at sea by hijacking a tanker around 100 nautical miles off Point Noire, Congo in October 2018.

Safety of crew continues to be a major cause of concern.
However, piracy as a cause of a total loss of a vessel is extremely rare. Only four of the 1,036 vessels that have been total losses over the past 10 years were down to piracy (less than 1%) with no reported losses since 2011. 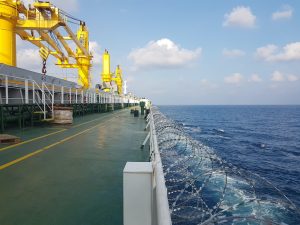