“I will really not back down. You can kill me, but I will remain. This is where our friendship will end.”

That was what President Rodrigo Duterte told China in a television appearance on May 13 amid a groundswell of anti-Beijing sentiment in the Philippines after dozens of Chinese fishing vessels intruded into Philippine waters in the Spratly archipelago.

The Filipino leader only made this remark now, two months after another previous aggressive incident in which Chinese fishing vessels, numbering around 200, were sighted at Julian Felipe (Whitsun) Reef in March, infuriating critics of Duterte’s diplomatic pivot to China.

The growing dissatisfaction first started from Duterte’s televised remark on May 5 when he denigrated the landmark 2016 ruling on the South China Sea dispute by the Permanent Court of Arbitration in favor of the Philippines was just a “piece of paper” that could be trashed.  This was in stark contrast to his 2020 speech at the UN General Assembly where he said he would reject attempts to undermine the ruling.

The tribunal also ruled that China’s claim to the entire South China Sea where about US$3 trillion worth of ship-borne trade passes each year, has no legal basis.

This flip-flop and perceived surrendering of maritime territory has become a gut issue for many Filipinos, particularly poor fishermen, who believe Duterte is conceding too much to China while they are getting too little livelihood support when their very lives are threatened by both the Chinese fishing militia and the deadly novel coronavirus at the same time.

A show of force

To stem the rising discontent, the military dispatched patrol vessels to the area while the Philippine Coast Guard (PCG) and the Department of Agriculture’s Bureau of Fisheries and Aquatic Resources (DA-BFAR) held joint maritime exercises in the area.

The exercises, first held in April with another scheduled in May, are meant to ensure the safety of Filipino fishermen and protect the environment, said retired Coast Guard commodore Eduardo Gongona, who now heads BFAR.

“The DA-BFAR currently works closely with other government agencies to boost monitoring, control and surveillance operations in the area,” Gongona told Maritime Fairtrade in an interview.

As of April 17, Gongona said they had already deployed six vessels and one multi-mission offshore vessel to the West Philippine Sea (WPS), the official name for the eastern parts of the South China Sea within the exclusive economic zone (EEZ) of the Philippines.

Six of these vessels are now in Palawan, and one is assigned to Bajo de Masinloc, said Gongona, an alumnus of the Philippine Military Academy and served in the PCG when it was wholly under the Philippine Navy.

“These floating assets will strengthen our capabilities towards maritime patrols, in compliance with the directive of President Rodrigo Duterte to sustain our sovereignty patrols in the West Philippine Sea, increase safety-of-life-at-sea operations and intensify operations against illegal fishing,” Gongona said.

On April 27, a PCG-BFAR maritime patrol spotted seven Chinese fishing vessels that were anchored at Escoda (Sabina) Shoal, but the vessels dispersed after being challenged by the PCG’s BRP Cabra, a Parola-class patrol vessel. Five Chinese vessels were seen two days later but also left after the arrival of the PCG.

An ocean conservation group, Oceana Philippines lauded the PCG and BFAR for their increased efforts to patrol and enforce the law at the West Philippine Sea.  “We urge the government to continue to protect our marine resources in the WPS to keep it a safe fishing ground for Filipino fisherfolk,” it said on its Facebook page.

Amid the public uproar over China’s aggression within the country’s territorial waters, Duterte declared on May 13 that the Philippines would not withdraw from Pag-asa Island or any of Philippine’s possession in the Spratlys.

“We have a stand here and I want to state, here and now, that our ships that are in Pag-asa and anywhere else… will not move an inch backward,” Mr. Duterte said in the televised public address.

However, the Filipino leader did soften the tough words by saying he did not mean to pick a fight with China, particularly since Beijing donated COVID-19 vaccines that are now part of the country’s inventory.

“I will tell China now, as I’ve said before, to repeat: I am not ready to withdraw. I do not want a quarrel. I do not want trouble. I respect your position and you respect mine. But we will not go to war,” he said.

But, Duterte stressed that does not mean the Philippines can be belittled and the country will also continue to assert its claims in the West Philippine Sea. 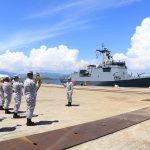 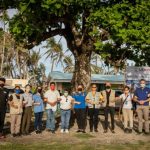 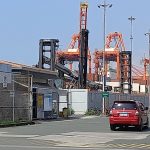