PTP is confident of further growth.

CEO of Port of Tanjung Pelepas Marco Neelsen foresees a positive outlook for the port for the current year.

The COVID-19 pandemic which has severely affected the global economy does not seem to have a negative impact on Port of Tanjung Pelepas (PTP), Malaysia’s premier transshipment port.  CEO Marco Neelsen anticipates a positive outlook for PTP, which is in Johor state, for the current year despite the current global economic uncertainties and health pandemic.

“However, with the current economic instability, PTP believes that the best strategy in ensuring growth is to be agile and adaptive to any situation and changes in the industry and the global market,” he told Maritime Fairtrade.

As such, Neelsen said, PTP will continue to be resilient against the crisis and pursue its journey growth to deliver the best possible value to its customers and stakeholders.

AmInvestment Bank said PTP is poised to surpass 10 million twenty-foot equivalent units (TEUs) in terms of container volume handled for this year, the first time ever in its history. PTP’s container throughput volume increased by 16 percent in the first quarter of 2021 to 2.78 million TEUs compared to that of the same quarter of last year.

“It is also a “beneficiary” of the Suez Canal blockage incident happened in end March 2021 of which the ripple effect, such as hiccups in the supply chain, shall aggravate the port congestion, resulting in more traffic diversion to PTP and demand for yard spaces in PTP,” said AmInvestment Bank.

PTP is 70 percent owned by MMC Corporation Berhad, a utilities and infrastructure group while the remaining 30 percent is held by APM Terminals, a leading global ports group with a global port network in 74 countries.

PTP recorded a strong terminal growth after accomplishing a record-breaking 9.8 million TEUs total throughput last year, representing a rise of more than eight percent growth at the back of 9.1 million TEUs recorded in 2019.

Neelsen attributed the growth to the surge in extra transshipment calls volume received due to the rise in demand in Asia and Europe as well as requests from customers to increase their throughput in the port.

Meanwhile, pent up post-COVID-19 demand for consumer goods and a significant container trade imbalance experienced by the 2M partners (Maersk Line and MSC) contributed to the increase in cargo volumes and ultimately increased handling revenue for PTP, he said.

Being part of the nation’s strategic asset and essential services industry, PTP continues to operate with certain restrictions as it is the port’s moral responsibilities and obligation to focus its attention and commitment into action to ensure that movement of logistics and trade continue without any disruptions.

With the increase demand from its customers and taking into account growth prospect, Neelsen said PTP’s primary focus today is to optimize the current terminal footprint. This requires and covers upgrading of its equipment fleets and utilizing yard capacity, optimization of system, as well as empowering digitization and automation effort.

The new cranes, which form part of the equipment modernization and replacement strategy, will replace aging assets which have been in service since 2002 and are scheduled to be delivered to PTP in the third quarter of 2022.

“Our digitalization journey will continue with the integration of Enterprise Resource Planning (ERP) application system, full roll-out of our existing Asset Digitization Program and few other related projects,” he said.

PTP will also continue to develop the next phase of its free zone expansion. According to Neelsen, the extension of Pelepas Free Zone, a continuation from the current model that is currently being developed for regional distribution centers with necessary infrastructure is set to kickstart from 2022 and leasing from 2023 onwards.

Committed to serving the local community

As Malaysia’s leading port and free zone operator, PTP currently employs more than 5,000 employees with approximately another 1,000 to 3,000 contractors working in its terminal on a daily basis.

PTP Pelepas Free Zone, situated adjacent to the terminal has also become such an important global and regional hub to Malaysia and specifically Johor that it houses more than 40 companies which employ 11,000 people in the vicinity.

With this, PTP is strongly committed to serving the state of Johor and the nation in achieving herd immunity to end the COVID-19 pandemic as well as to further extend its corporate social responsibility reach towards the sustainability of its surrounding community.

PTP has also collaborated with several government agencies to set up the Industry Vaccination Centre (PPVIN) for maritime and logistics sector workers. The center is able to accommodate up to 1,000 workers daily and approximately 27,000 vaccine recipients until end of the program. 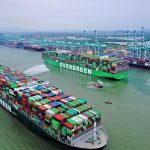 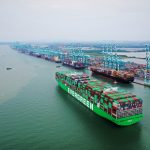 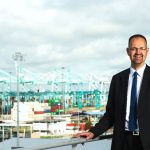